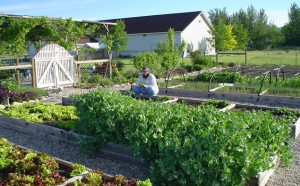 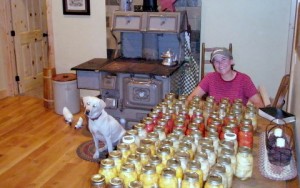 Canning the summer garden in preparation for winter 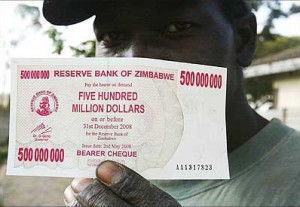 Watching the national news lately has been disturbing. Night after night the dire prognosis of leading national economists has been striking fear and panic into the very heart of America.  There appears to be little optimism for a quick rebound from a recession that some are now calling depression.  With the general consensus predicting that conditions will worsen before they get better, many baby boomers are pulling out mutual funds that were earmarked for retirement. They are doing this even at the cost of paying huge penalties. No one seems to know exactly where all this is going or when it will end, but two projections seem certain; there will continue to be an increase of unemployment and our unprecedented bailouts and stimulus plans will likely take our nation into hyperinflation.  Both have the potential of forever changing the financial complexion of America.  Our indebtedness to countries like China, Japan and Saudi Arabia will one day come home to roost and demand an accounting.  As the U.S. mints run the printing presses making more money the American dollar will gradually lose its value. What then should we do?  What can we do?

Nearly everywhere I go these days I hear people asking what they should do to prepare for the difficult season that most economists are saying is inevitable.  I’ll admit that I don’t have all the answers. Having wrestled with the questions for a while, I can tell you what Nancy and I are attempting to do.  Though we are all impacted by the current economic conditions, each situation is unique as we face different challenges – some have a huge debt load while others are debt free; some are presently employed and gaining income while others are not; some are on the verge of retirement and others are just beginning a professional life. No one answer will serve all; but having said that, I think there are a few questions everyone should be considering and attempting to answer in their own way:

1.  If you have accessible assets and funds what should you do with them?

My mom and dad lived through the “great depression” and like so many of their generation they not only remember it well, but have based most of their financial decisions in life on that experience. For example, I’ve never known them to buy a car on time but rather they have always saved up and paid cash.  Recently my dad told me that the people who survived the depression the best were those who had their assets invested in real things.  (We call property “real-estate”, because it’s real.)  Those who owned even a small piece of land plus the tools to farm it and raise some animals had the best chance of putting food on their table each day.  Investments are good, but in a time of crisis you can’t eat gold, silver or hyper inflated money.  It is also important to invest in the things that sustain life. In answering the crucial question about assets, first consider the most basic needs such as shelter, staying warm in the winter, food provisions, and fresh water supplies.

2.  Do you have the training or expertise to grow food in season and preserve it for the off season?

During WWII President Roosevelt encouraged all American citizens to dig up their backyards and plant vegetable gardens so that they could feed their families and neighbors in order that commercially processed foods could be sent to the war effort.  These were called “Victory Gardens”.  In those days most folks were familiar with vegetable gardening techniques and food preservation practices such as canning, drying and smoking. In today’s culture many of these skills have been lost to modernization.  Even if people had a little ground and some seeds I’m not sure if most would know what to do with them.  A year ago I challenged our church to grow victory gardens.  We held classes on sustainability teaching people how to can food and to make money stretch with strict budgeting.  It shocked me how many people responded to my call for training and preparation. Not only did it help folks, but everyone who did it had a great time and a rich experience.  The standing joke quickly became the warning to never leave your car unlocked in the church parking lot or you might find your back seat filled with oversized zucchini.

3.  Are you part of a community of faith that has grasped God’s heart to serve rather than be served in a time of great need?

I believe the thing that will sustain people more than anything else is being part of an authentic community of faith.  As the unemployment rate has soared in Idaho our fellowship has been providing food, medical and financial assistance to literally hundreds of families. During the last growing season our church community garden gave away over 25,000 pounds of produce to people in need. (See the garden website at: http://godsgardens-boise.ning.com)  People rallied and have joined together to meet the escalating needs.  The Bible tells us that where two or three are gathered together in the Lord’s name he is there also, and I would add – his provision is there as well.  Over and over again we have experienced real miracles much like the time Jesus multiplied the fish and the loaves when he feed the 5000.  True Christian community not only unites for the purpose of serving together, but to pray and draw strength from one another.  Together we are encouraged and reminded of God’s unfailing love and faithfulness and that he is ultimately in control.  Honestly this is a huge component of being sustained during such a difficult time.  Sustainability is more than a physical matter; it is emotional and spiritual as well.

4.  Do you have vision to participate in reformation on three levels: personal change, national reform and global compassion?

When I wrote the book Small Footprint, Big Handprint it was my heartfelt desire to convince people how critical it is for all of us to consume less so that we can contribute more.  For a long time now the developed world has recklessly consumed the earth’s non-sustainable resources. Now with a world population approaching 8 billion we are beginning to experience very real shortages.  We have over-used and misused fossil fuel, fresh water, soil and minerals to the point that the welfare of our future generations is in jeopardy.  We have not aggressively pursued renewable sources or responsibly conserved non-renewable ones.  In our neglect we have not been great stewards of God’s creation and some have even belittled his commission to do so.  This is a matter of making our lives smaller so that our positive impact on suffering humanity might be greater.  Making a “big handprint” speaks of being used by the Lord to make a viable difference in the world, especially in the developing world among the extreme poor. It is not enough to look to our own interests at a time like this, but to the interests of the less privileged as well.   If there is to be reformation and lasting change each of us must individually consume less; we must work as a nation to reform food production, renewable energies, soil and water restoration and conservation as a whole.  As Americans we can never lose our heart for worldwide benevolence and compassion. We must grasp the heart of God for a broken world and embrace his ministry for the downtrodden.  This is not a time to react in fear, but to rise up in faith and in action.