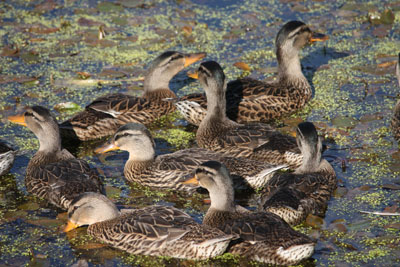 The young ducks were basking in their freedom

If you are a faithful follower on the Timber Butte Homestead blog site you may recall reading about how Nancy commissioned me last spring to construct a floating duck house. (See entry #193 – April 18th 2011 – found under poultry) She decided to release three of her most precious Rouen ducks (Hazy, Lazy & Daisy) on the pond at the bottom of our property.  Again, as you may recollect in an earlier entry, she had raised these particular little ducklings in our bathtub the year before. (See entry #164 – May 1st 2010 – “Meet Daisy, Lazy & Hazy or is Nancy just a little crazy”.) All this to say, these were not just any normal barnyard critters; these little ducklings had experienced some special rearing by the grandmother of all ducks. Anyway, the minute the door opened on their new house, out into the open world they fled, into the wild in a state of terror. It was as if Nancy was hiding in a duck blind blazing away after them with a 12 gauge shotgun; which of course she wasn’t. Of the three (a drake and two hens), one hen was never to be seen again. I reckon she became some coyote’s dinner that very first night.  The remaining two did however manage to survive the ordeal and soon were happily swimming on the pond together, at least for awhile.  After a few weeks, to our dismay, the second hen disappeared as well. At that point the poor lonely drake sat by himself among the overhanging willow trees at the edge of the pond day in and day out. He looked lonesome and forlorn but clearly had no intention of being recaptured and returned to captivity. Nancy faithfully left deposits of cracked corn on the porch of his floating duck house, which although he pretended to ignore anytime we were around, he managed to consume day by day.  This went on for weeks until to Nancy’s elation the missing little hen finally showed up one evening swimming across the pond followed by ten fluffy baby ducklings. It was a great day of celebration on the homestead.

Throughout the remainder of that spring and summer the small little family grew to maturity until it became difficult to discern between the parents and babies. Two of the babies had been lost by an overzealous Lily (our little golden lab) who had somehow gotten in touch with her forgotten bird dog DNA. I might add that Lily was quickly and somewhat severely reminded that ducks were off limits no matter who she thought she was. After that brief unfortunate incident (for both Lily and the ducks) everything remained tranquil on the pond until the first freeze in October. That’s when the coyotes realized that the remaining ducks were somewhat easy pickings now that it was possible for a full grown carnivorous animal to walk on water. Two more of the family were lost within days. In a state of desperation I was once again commissioned to construct a large duck contraption. This time a duck trap.

In late October the trap was set and baited with a tempting pile of cracked corn and the following video was captured on a cell phone of a friend, Eric Mc Cray, who happened to be present on that famous day of Nancy’s great duck rescue. Just a note before you watch this – it was very difficult to get all the ducks in the cage at the same time and when the last small hen did eventually enter I prematurely sprung the trap. Nancy’s reaction was a result of the fact that the heavy door fell on the little hen’s neck as she attempted to escape. I was certain that she (the duck) would become that night’s dinner but was surprised to discover that Nancy managed to release her unscathed by the traumatic ordeal. In all honesty I was actually more concerned about Nancy running down the snowy bank helter-skelter than the welfare of the duck. All ended well as you will see.