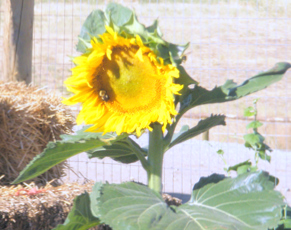 February arrived today without a trace of warmth or sunshine. In faith we have ordered fruit trees to be delivered sometime in March knowing that the ground will eventually warm along with our motivation to prepare for another spring.  In addition to fruit trees and a fresh supply of hybrid vegetable seed we have also acquired two bee hives even though we know little about them.  Our Timber Butte homestead project has put us on some major new learning curves that have challenged us to do things we have never had to do before.

Last summer while working in the vegetable garden I spotted a lone Bumble bee lazily working its way through the sunflowers. Nancy had planted them for both color and as a supplement to the chicken feed.  As I watched the lonely bee work from flower to flower an alarming revelation struck me; this bee and his few Bumble bee friends were the only bees we’d seen all summer.  There was a startling absence of honey bees.  It struck me then that what has been labeled Colony Collapse Disorder, was real and was threatening our ability to grow food right here in our own garden and orchard.

Colony Collapse Disorder is a very real crisis that is a far greater threat than I believe many people can comprehend.  It has been clouded behind other world and national crises to a point that it has not received the attention it merits.  In 2006 (only three years ago) the alarm had been sounded by beekeepers nationwide who were announcing that bee populations had drastically and mysteriously diminished to half of their normal state.  This percent has gradually increased each year since.  I have read that according to World Bank, food prices have risen to over 80 percent during this same period.  The point being, without bees there will be no crops and thus no food.   There are a number of theories as to the disappearance of the bees yet nothing at this point seems to be conclusive.  Most scientist believe that the disappearance is a result of a combination of a number of casues: The over use of pesticides in conjunction with the commercial chemical nitrogen fertilization which is breaking down the bees immune systems; contaminated water supplies; and stress caused from moving bees long distances for pollination needs. All of this has weakened the bee’s ability to wart off invading  new parasites or pathogens.

I remember being seriously alarmed when I first read about this problem in 2006.  I was reading the L.A. Times one morning while staying in a hotel in Southern California.  The article stated that there was a major problem with honey bees across the nation, but because the crises was a new one scientists where merely guessing at the cause.  The article went on to suggest that cell phone waves might be interfering with the bee’s natural navigation system causing them to loose their way back to their hives.  Just the suggestion of that hypothesis scared me beyond belief simply because I was certain that humanity would not be willing to give up this relatively new commodity even if meant the extinction of the bee.  The thought hit me that bees had been serving the eco systems of the earth from the beginning of creation while cell phones had become a luxury commodity only in the previous ten to twelve years.  Maybe I’m too cynical, but from past track records I believe that if mankind had to make a choice between the two, the bee very likely might loose.

As a result of our Bumble bee awakening we have decided to do our part for the welfare of the honey bees while at the same time meet our pollination needs. Come spring time our new bees will arrive and be given a new home here at Timber Butte.  When this happens we will give you a progress report on the success or failure of our efforts.  In preparation for this new venture our friends and bee learning comrades, Mike and Rena Lute have loaned us a book entitled “Bee Keeping for Dummies” by Howland Blakiston.  It is a book that I would recommend for those who like us recognize the crises for what it is and desire to do something about it.  To check it out go towww.dummies.com .