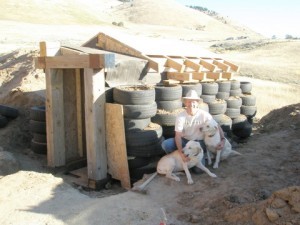 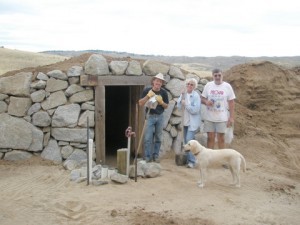 If you have been following my entries this past week you know that I have been sharing about my experience building root cellars.  To catch up you might check out the last two entries before reading this one.  O.K. – We dug the hole, framed the inner room and constructed a short hallway that would eventually connect the outside world to the  storage room.  I wrapped the OSB sheeting with two coats of heavy weight black roofing paper, sheeted the roof with 2X12’s and screwed down heavy gage roofing metal.  As you might suspect the 2X4 framed walls were never meant to hold back the weight of the earth or the moisture that would eventually push in on the wooden structure.  (Note that the framed structure is only in place for the purpose of giving the inside room square plumb walls so that shelving can be attached to them at a later time.)  Next I added the real structural strength and the barrier that would hold back both earth and moisture – old worn out, used up, rejected car tires.  I had read about tire structures before, but had never actually tried to use them.  I was surprised to find out that most local tire stores are more than happy to have people haul used tires off, in fact, some will even pay you a dollar a piece if you promise not to return them.  I filled my four horse trailer two different times with these unwanted beauties and carted them home.  I neatly stacked them in a brick like pattern around the perimeter of my framed structure and filled each one of them to the brim with loose dirt.  I jumped up and down compressing the soil as best I could and continued adding layers until my wall of recycled tires reached up under the 4X6 rafters.  I placed a treated 2X12 across the top layer of tires tightly fitting it under the rafter tails. This gave the roof structure additional support. When I was finished I wrapped the entire structure several more times with heavy gage plastic and began to back fill the entire thing with the earth that had been removed from the original hole.  Some good friends, Duncan and Irene (whom we will speak more of later) joined in and helped build a granite retaining wall across the front.  We built the wall using local rock which I had acquired from our generous neighbor Craig Krosh (See entry #6). When the cellar was completed the outside gave the appearance of an old mine shaft. (I’ll post a video that shows the completed structure on Friday.)  Later on I hung the two doors and built the shelving which would hold Nancy’s canning and other food supplie.

Before I close this entry I want to make one important parallel comment about the recycled tires that had become so valuable to the success of this project.  After years of ministry I’ve met numbers of people who thought they knew their purpose in life only to find themselves feeling worn out, used up and set aside.  This perspective often brings on paralyzing depression and all kinds of dysfunctional behavior until it is discovered that God has a totally different plan.  Like these tires, the real plan isn’t to be used up and discarded, but rather to be used for a much greater purpose.  This truth reminds me of the scripture in Jeremiah that communicates God’s real heart for us.  It says, “… I know the plans I have for you,” declares the LORD, “plans to prosper you and not to harm you, plans to give you hope and a future.” (Jeremiah 29:11)