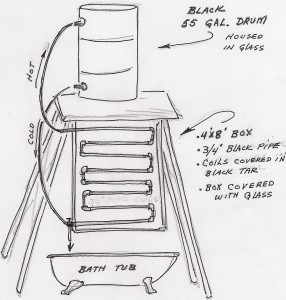 Even though Nancy and I lived for the first fourteen years of our married life without being hooked up to a conventional electric grid, we were by no means free of a monthly utility bill.  Our entire household ran off  a five hundred gallon propane tank which had to be refilled on a regular basis.  Nearly every utility we owned was fueled by propane: the refrigerator, the hot water heater and even the lights.  As far back as 1972 I had a desire to figure out ways to beat the system, but the technology we have today is still a long ways off.

I’d like to say that my first experiment with solar power was born out of my desire to save humanity from a future energy crisis but the truth is, it was motivated from an attempt at keeping peace in my house.

Building a ranch is hard dirty work.  A normal day generally left me filthy from head to toe causing Nancy to require the striping down and washing off of the first layer of dirt before setting foot in her clean house. Our water was spring fed and uncomfortably cold even during the hot months of summer.  That simple reality motivated the construction of our first solar heated shower and bathtub.

Like most old places in the country our ranch had a wonderful junk pile consisting of all kinds of accumulated odds and ends that had been set out of sight, concealed behind a grove of wild Mountain Mahogany.  It was there that I found everything I needed for the construction of this first sustainable water heater; old pieces of ¾ inch iron pipe, an empty 55 gallon drum, some discarded rubber hoses, a five gallon bucket of roofing tar, a few old windows  and a discarded claw-foot bath tub that had previously functioned as a watering trough.  I had little knowledge of thermal dynamics, but there were three principles that I did understand and incorporated into my experiment.  The first principle was that water gets really hot when it sits in a garden hose when left in the hot summer sun; the second was that black things attract heat; and finally, the commonly known principle that heat rises.  Putting this basic knowledge together with the miscellaneous junk that I had recovered from behind the brush pile allowed me to construct the contraption shown in the diagram and picture above.  The most amazing part of my crude experiment was that it actually worked.

I connected my ¾ inch lengths of black iron pipe into a long coil and laid it in the bottom of a 4X8 wooden box.  I then poured hot roofing tar over the coil and nailed some old wood framed windows on as a cover to the box.  I then attached the box to the tower just below the 55 gallon drum, which I had painted black. It was aimed in such a way as to capture the direct southern sunlight.  The box was hinged so that it could be lowered and elevated according to the sun’s location on the southern sky.  I then screwed one end of my two black rubber hoses to the iron pipes in the collector box and attached their opposite ends to a fitting I had welded to the top and bottom side wall of the drum.  As the sun heated the water in the tar-covered pipes, the heat naturally began to rise up through them and was transported by the black hose into the top of the 55 gallon drum.  This forced the cold water in the drum downward whereby pushing it through the bottom hose into the bottom of the pipe coils. This began a continual convection process that kept the water circulating through the closed system until the drum gradually heated to a perfect bath temperature.  At the end of the day I would open a valve which then emptied the 55 gallon drum into the claw-foot tub located directly under it.  Later I tried to improve my heater’s efficiency by enclosing the black drum with more framed windows (see picture). As I recall it didn’t seem to make a great deal of difference.

Not only had I managed to utilize the sun’s power to produce some free hot water, but more importantly I managed to make life a little easier for Nancy.  I tell you this story not only because it’s true, but to dispel the idea that sustainable living is a new idea or a cultural fad. The truth is there have been lots of folks who have been using the energy of the sun and wind in creative ways for a really long time.  Reading past issues of periodicals such as The Mother Earth News and The Small Farm Journal will prove this to be true. There is no question that my first solar bathtub was an eye sore and really crude, but it did work and served me  nearly forty years ago.  I would say that the project was a complete success except for the fact that as hard as I tried I never did get Nancy out there with me on a full moonlit night…but our children loved using it as a wading pool.